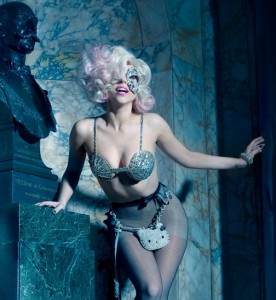 Recently a colleague asked me to share some ideas on how to present on identity to a first year writing class. I told her that during the time I was teaching fyw (I’m currently teaching rhetoric, technology, and the internet), I approached it through a very multimodal pop culture focus: Lady Gaga.

In order to reach a variety of people (I had a returning vet, a high school student, foreign language students, and traditional students), I needed to set this concept up in ways that the students could all relate.

What was really interesting about this form of discussion is that because it was held early in the semester, it gave a baseline of inquiry into the topics we tackled later in the semester. We (and usually this was the students) referenced the Paglia and Halberstam articles several times throughout the semester in relation to ideas of community, technology, and critical analysis.

The best outcome, though, was that we had fun. It was enjoyable to see the students get excited about the discussions.

This site uses Akismet to reduce spam. Learn how your comment data is processed.